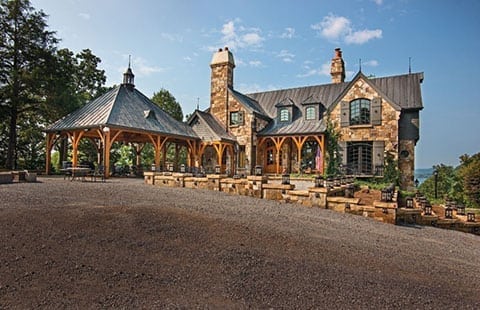 Brian Hayes has memories of summer vacations with his family at Dale Hollow Lake in Kentucky. Three generations later, it remains a special retreat for him, his brothers, and all of their children.

“We all fell in love with the place the first time we went,” says Hayes, of Noblesville, Indiana. “After my brothers and I grew up, we started taking our own kids down there. We’ve watched the place grow from being undeveloped to now being a resort area. Three generations of our family have loved this place.”

When a developer began selling lots in the area, Hayes couldn’t resist purchasing land to build a family retreat where his two adult children and grandchildren, along with his extended family, could gather. He found a stunning parcel known in the area as Skull Bluff – a local landmark in the Albany, Kentucky, community – overlooking the lake with 2,100 linear feet of shoreline.

“The developer had just put the property on the market the day I went down there to purchase land,” says Hayes, whose primary home is 300 miles from the site.”I had my pick and got a premium lot. It all just happened on a whim. It’s a remarkable property. We were lucky to find it.”

Hayes, who builds high-end custom homes (conventionally framed), decided to build a timber frame home. The home, which was completed in 2007, was designed and finished in a French country style.

Produced by Riverbend, based in Meridian, Idaho, and built by Hayes” company, Quality Homes by Brian Hayes Inc., the 6,500-square-foot home is constructed of white oak timbers, Riverbend”s timber frame is true mortise and tenon cut on a CNC machine, prefit in the shop and installed in the same way timber frame homes were assembled hundreds of years ago with oak pegs.

“The natural beauty and artistry of a traditional timber frame becomes a central feature of a home like this,” says Stephanie Johnson, Riverbend’s marketing manager. “Gentle arches, detailed connections, and exposed pegs add a romantic feel to this amazing timber home.”

While the interior walls are made of 2×4 framing, Hayes covered nearly every interior wall and ceiling with wood to match the timber framing elements. He also installed an I-joist floor system, an engineered product that is known for strength and stability.

“You get perfectly straight, incredibly strong and smooth floor with the I-joist system,” Hayes says. “They call it the silent floor because it doesn’t squeak like a regular wood floor does. They’re very desirable and a huge step forward in the building industry.”

The building site did present some challenges. A remote parcel atop Skull Bluff, there was only one route in and out of the site.

“You could hardly turn a truck around on the site,” says Hayes, noting that the house sits 300 feet above the water. “We had to stage our materials, and it was a big undertaking.”

The site has unique typographical features, including an L-shaped cut into the mountainside that has historical connections. Before the Civil War, Hayes explains, that section of Skull Bluff was blasted out to create a path from the forest to the river. The loggers would drag the logs out, slide them down that path and into the river in order to float them to Nashville. Hayes tucked his home right into that spot.

“It worked out perfectly,” Hayes says. “My basement ceilings are 14 feet high – just the level of where the land had been blasted 150 years ago. It’s a walkout basement, but in the front of the house you can’t see it. I love history, and I was fascinated with the history at Skull Bluff. The fact that it’s a landmark meant so much to me. I love a good story.”

The home features impeccable details, many crafted by American artisans. The alder kitchen cabinets, for example, are Amish-made by Harlan Cabinets in Indiana. The five-foot-wide, 12-foot-long kitchen island top – made by Greg Laco at Green River Stone Co. in Logan, Utah – is a stone slab embedded with fish fossils that are 50 million years old. The architectural carvings and moldings along the stairs, the kitchen and bathroom cabinets, and other spaces throughout the home, made by Enkeboll, based in Carson, California, add to the home’s historic feel.

The fixtures throughout the house are made of copper, and so is the roof. Natural stone accents run throughout the interior and exterior. The quartz stone is a buff color with green highlights due to the moss and fungi growing on it. 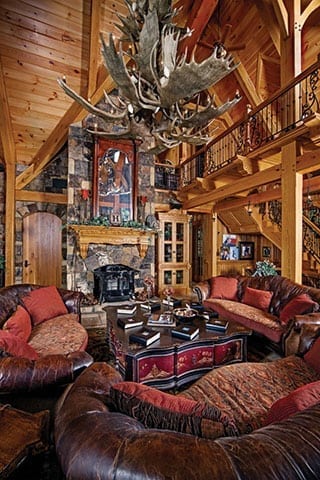 “Even though they have pulled it off the mountain and have cut it into squares, the moss still grows on this stone,” Hayes says. “So it just gets its nutrients from rain and the air. It still has that very natural look, and I love the coloration.”

Hayes selected two types of flooring material. In the master bedroom and upstairs, he chose antique heart pine, which was salvaged from an old factory in Louisville, Kentucky. The main level, except for the master bedroom, is covered with chiseled limestone with in-floor heating. These elements, combined with an on-demand hot water heater and a SIP envelope for insulation in all the timber frame elements, create an energy-efficient environment.

“This house is extremely comfortable and extremely easy to heat,” Hayes says. “We use propane to heat the house and the water. But we use just 500 gallons of propane every three years – that’s how efficient this house is. I can heat it all winter long for about $500. It’s the most efficient house I’ve ever seen.”

Hayes built the home with family gatherings in mind, so the entire basement and main living level are designed with an open concept. With two bedrooms on the second level, an open loft, and a bedroom in the basement, Hayes can host many family members at once. And his master suite on the main level with its spectacular lake views is the perfect place to retreat for privacy.

Hayes says the family often gathers in the basement, which is equipped with a bar, billiard table, and big-screen TV, to relax for big sports events like the Super Bowl. During the summer months, a get together can spill over to the 30’x34′ covered patio outside. Additionally, because that area of Kentucky is prone to tornados, Hayes added a tornado shelter with a 2.5-foot-thick ceiling in the basement.

If you’re thinking about building a timber frame home, Hayes recommend doing extensive research. Find out what kind of joinery and lumber products a company uses and find out about their design and manufacturing process. Hayes was happy with the professionalism and good communication from the staff at Riverbend.

“I’m the pickiest guy you’ll ever meet – that’s what’s made me a successful home builder,” Hayes says, laughing. “For me to hire another company to produce my home and not have any problems was remarkable. Riverbend is first rate. I pinch myself every time I ride up the driveway. This house is a dream come true.”