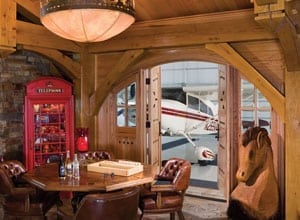 Dale and Brigitte Stevens love to fly. In fact they own their own plane – a Maule MX7. The couple flies so much that when they were looking for property to build a dream home, one of their requirements was that any acreage they found had to have a strip of land long enough and flat enough to become a runway.

The couple spent several years looking for just the right property – spending many a Sunday afternoon just driving around. They looked at many parcels, but none of them could accommodate a landing strip.

At the time, the couple had been happily living on a lake near the town of Jackson in the lower peninsula of Michigan. Over the years, however, as the area became more congested, the Stevenses began to feel hemmed in. “We got tired of all the traffic,” Dale says. “And we had no privacy. That’s why we were looking to move out to the countryside.”

One Saturday afternoon the couple made a happy discovery. They were driving not far from their lakeshore home when they passed a 175-acre parcel that was for sale. It was perfect for their needs. There were two bodies of water on the property: a 5-acre pond and a 35-acre lake. That meant that they could still live near water, yet not have to share their shoreline with anybody but themselves. Their interest was piqued when they discovered that there also was a flat area near the pond which could be turned into a runway. 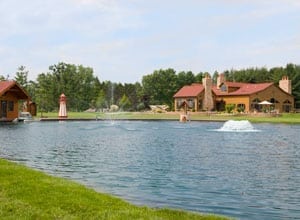 The couple didn’t contact their real estate agent right away, though. When Dale called on Monday, he found out that another party was in the process of submitting a contract. They were attaching a contingency, however, to their contract. “So I wrote an offer without a contingency,” Dale says, “and we got it.”

The previous owners had used the property as a fishing retreat. A small dilapidated cabin sat by the lake. “The people that owned it before just used it as a fishing cabin,”Bridgette says. “It wasn’t very nice.”

After rebuilding the cabin, Dale and Brigitte sold their lakeside home and moved in. Their next goal was to construct a large hangar in which to park their airplane. Dale, who owns a construction company, also planned to store heavy equipment (like backhoes and bulldozers) in the oversized building.

With the construction of the cabin and hangar completed, the couple then made plans to build a home at the top of a small hill overlooking the lake. Dale, who had always wanted to live in a wood-filled home, at first looked into building a log home. While he liked the log homes he saw, what really caught his eye was an ad for Riverbend Timber Frames in one of the magazines. “I had always thought about building a log cabin,” Dale says, “but when I saw timber framing, I just like the big beams.”

Dale contacted Riverbend, which is headquartered in Blissfield, Michigan, and was put in touch with Jim Balmer, a salesman for the company. When Dale and Brigitte met with Jim to discuss their project, they looked at a lot of pictures of completed homes the company had built. It was Jim’s knowledge and experience, however, that convinced the couple that Riverbend was the company they should go with. “We felt really comfortable with Jim,” Dale says. “So we didn’t look at any other companies.” 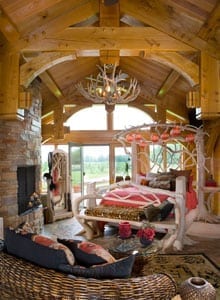 A Change in Plans

Dale and Brigitte commissioned Riverbend’s staff to come up with a design for a house, but as plans were progressing, Dale proposed to Brigitte a change in direction. He suggested that instead of building a brand-new house, they convert the aircraft hanger down by the pond into a home. The airplane would still be housed on one side of the structure, but the majority of the space would be converted into living quarters. Brigitte didn’t mind as long as Dale promised her that he could turn this enormous empty building into a cozy comfortable home.

With that, the couple called Jim to ask if it was possible to fit a timber frame into an existing structure. While it would be highly unusual, Jim said, it was possible. “It’s certainly not cost-effective to put a frame inside an existing building,” Jim says, “Primarily because it means that the frame has to be put up one piece at a time.”

Since the couple wanted work to get started as soon as possible, they commissioned Jim’s team of designers to create a frame out of red oak for the 84-by-60-foot space. They would have to do it, however, without a concrete floor plan to work from. “The only plan we had for this was to use the timbers,” Dale says. “We didn’t have any room layouts done; we decided to do that after the timbers were put up.”

To make the hangar look more homey, the couple made several changes to its outward appearance. First they asked Riverbend to design an addition of a porte cochere to one side of the building. Since the original structure didn’t have a formal entry point, the porte cochere would give the space the entranceway it needed. Then to make the roof look more house-like, the couple changed it from a utilitarian style gray roof to one with red shingles. Lastly, they added three fireplaces and six dormers, which made the building’s transformation complete from a nondescript warehouse to one with character and budding charm. 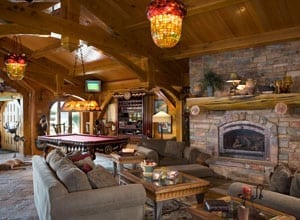 Because Dale wanted the home to have a masculine, lodge-like look, it was decided to use larger-than-usual timbers throughout the structure. “He wanted oversized timbers on the inside,” says Jim. “Normally we’d use 7-by-11-inch timbers, but we went with 12-by-16s for most of the posts and beams.”

Contributing to this look was the addition of hammerbeam trusses throughout the space. The only constraint in using trusses was that in engineering them, Riverbend’s designers were limited by the ceiling height of the original hangar. “So the tallest point of the frame is only 14 feet,” Jim says.

A lower ceiling height also creates an unseen problem: It puts additional strain on the hammerbeam structure. “Since we were using oversized timbers,” Jim says, “we decided to beef up the joinery to compensate for the flatness of the pitch.”

Putting the frame up piece by piece meant that it took Riverbend’s crew longer than usual to raise the frame – two weeks as opposed to five to seven days for most raisings. Once the frame was up, Dale and Brigitte took two-by-four-inch boards and laid them on the ground to figure out room configurations. They also decided that the porte cochere with its hammerbeam trusses was such a dramatic space they would enclose it – making it into a pilots lounge with views of both the runway and the pond. With its large floor-to-ceiling windows, it’s become one of the couples favorite spots to entertain their friends.

Dale and Brigitte admit that their home, which from the pilot’s lounge on one end to the garage at the other spans 160 feet. is definitely unique.

“You really have to see it to understand it,” Brigitte says with a chuckle.

Its not your typical timber frame – its shorter than most, larger than most and different than most. But the one thing that matters the most is – it fits the owners just fine.