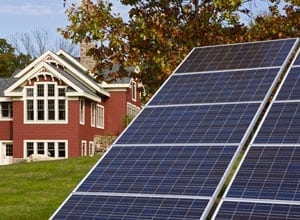 An environmentally friendly Michigan post and beam timber frame home is short on waste and long on beauty and comfort.

Bob Burnside doesn’t cut corners, a fact that can be either incredibly helpful or impossibly annoying to a homebuilder. No matter. Bob refers to his building style as MBWA, or Management By Walking Around. “I watch what people are doing, and I ask a lot of questions, which helps everybody pay more attention and do their jobs more thoroughly,” says Bob.

Which begs another question: How did Bob become one of only 32 homeowners in America whose house is LEED-certified platinum, meaning it’s super energy efficient and, in the trendy vernacular of the day, green? “I think of green as shades of gray,” he says. “There’s no such thing as a finish line when it comes to green, but you make sure everything is done to the best of your ability. Some things don’t even cost any more money to be green—it’s just a matter of paying attention to detail.”

It wasn’t just moseying around the timber frame construction site, though, that allowed Bob to build such a beautiful and efficient timber home—it was about being organized. When he was ready to get started, he sat down with Marty Birkenkamp, design department manager at Riverbend Timber Framing in Blissfield, Michigan, and told him what he wanted. According to Marty, the process was relatively simple. “The long and narrow home site, along with Bob’s preferences for rooms, easily dictated the layout,” he says. The timber framed house has three bedrooms, two and a half baths, and covers 4,208 square feet. 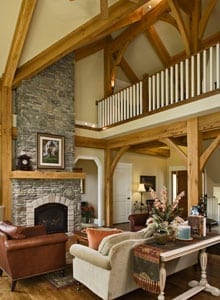 While details matter, some big-ticket items are critical for efficiency. Two geothermal systems manage the climate in the post and beam home. A large underground pipe uses the earth’s natural temperature—an almost constant 57 degrees—to cool the water in the summer and heat it in the winter. But the house, which uses no natural gas or oil, doesn’t have a large need for climate control; the structural insulated panels (SIPs) used in the walls and roof keep the temperature constant. Made of expanded polystyrene and oriented strand boards (which are similar to plywood), they’re virtually leak-proof and infinitely more efficient than conventional 2-by-4 wall framing. The basement is framed by insulated concrete forms (ICFs), which are hollow blocks of expanded polystyrene filled with concrete and stacked like Legos.

Although all these innovations are invisible, they make a palpable difference. The temperature is the same throughout the post and beam house, including the basement, which remains warm and dry all year. Bob spends approximately $600 a year on utilities. And last winter, during a bad storm, the house’s insulation mocked Michigan temperatures. “It was five degrees outside and we lost power for 16 hours,” says Bob. “The wind was blowing like crazy from the west but we only lost five degrees of temperature—the house went from 71 to 66 degrees.”

While the modernity of Bob’s timber home is impressive, the home’s real appeal isn’t so much its efficiency as the fact that all the innovations don’t detract from the its beauty. “When you start talking LEED platinum, people start thinking space age,” says Marty. “But when they see Bob’s house, the shock comes. Nothing jumps out at you that says, ‘This is remarkably different.’ You step inside, and you instantly feel the warmth.”