When It Pays to Throw Out the Old

This is the story of how a dearly loved lakeside cottage that had been in a family for years gave way to a modern timber frame-home. The owners no longer mourn the loss but celebrate what they’ve gained.

When Tom and Carol Santoro first decided to live full time on Blind Lake near Ann Arbor, Michigan, they thought they would expand the family cottage. But as they worked on those plans with architect H. Scott Diels, they were tugged in another direction.

“I’ve always been a woodworker, always been attracted to wood,” Tom Santoro says, “and as we browsed the book racks for ideas, we came across ‘Timber Home Living’ and other publications, and we really started exploring timber framing.”

The Santoros discovered that Riverbend Timber Framing in Blissfield, Michigan, offered a one-day seminar titled “Timber Framing 101.” After the class the Santoros were even more intrigued by the possibilities. But the cottage had been in their family since 1987, and Diels already had sketched out stick-frame addition.

However, the architect was enthusiastic about the prospect of transferring the plans to a timber home. “To complete the design with a timber frame actually opened opportunities that wouldn’t have been there,” Diels says. “It allowed you to modulate the interior space with the timber beams and brackets. You could repeat the element through the house, and that just helped pull everything together.”

Still, it meant saying goodbye to the cottage. “The hardest decision we had to make was to tear down the old cottage,” Tom says. “But in hindsight it was a great decision.” They salvaged bricks from the cottage for the fireplace on the new home’s lower level. But the real connection was forged as the Santoros realized how much the 3,800-square-foot, four-bedroom house embodied what they wanted in a home. “It’s much more versatile. I love the openness,” Tom says. “All the rooms have windows facing the lake, and the wood gives everything warmth.”

The Santoros chose Riverbend as their timber provider because they loved the firm’s Michigan red oak timbers and the fact that it provides structural insulated panels (SIPs), eliminating fit and compatibility worries. Riverbend, in business since 1979, works on more than 100 houses a year, according to Connie Seiser, a sales representative. Riverbend’s sister company, Insulspan, manufactures the panels. “We offer a very, very complete ready-to-assemble package,” Seiser says, “and that’s something people really like.”

The Santoros picked Bob Burnside’s Fireside Home Construction in Dexter, Michigan, as their builder. They were impressed with his dedication to green building and how he ran his company. Burnside has been in home construction for 13 years but brings management experience as a former General Motors executive. “We plan everything down to the doorknobs,” he says, “so we can offer a guaranteed budget that doesn’t change unless you make changes.”

The architect, timber-frame company and builder all combined to create a timber home for the Santoros that proves that the new can have as much meaning as the old. “There’s never been a second thought,” Tom says. “It’s become our home.” 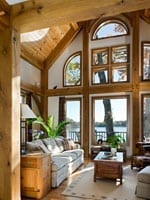 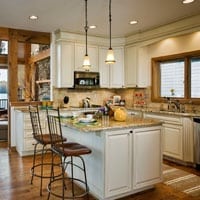 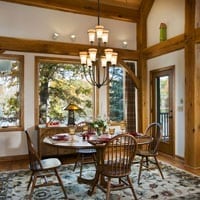