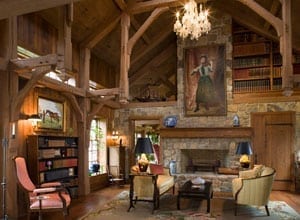 After a fire devastates their 18th-century home a Long Island couple builds anew and maintains the historic character of their original house.

Dedication to authenticity in each room is astounding and it’s the attention to detail that makes this home feel like its weathered hundreds of years of living. The carved hammerbeam trusses. They’re simply to die for.

Every custom home represents an obsession. Why else would you put up with the inevitable delays, unexpected costs and other hassles that come with such a project? But few homes are as magnificent an obsession as the one built for Carol and David Deutsch on Long Island.

Or partly rebuilt, to be accurate. The Deutsches originally bought a circa-1700 farmhouse that once had been a leather tannery. But then there was a fire. It was the kind of turn one would scoff at in a movie: Carol sitting in her chair working on her needlepoint leaves her magnifying glass too close to the window, igniting a flame.

Damage to the house was devastating and the place was leveled so they could rebuild. “We wanted to be true to the period.”

As someone who writes about antiques and fine arts, this meant far more to her than it might to someone else. She not only wanted the house to look like its original incarnation, wherever possible she wanted to use the same materials, and even have those materials hand-fashioned in ways close to those used nearly 300 years ago.

“I wondered where I was going to get these craftsmen,” says Carol. “But they came out of the woodwork, and loved the challenge.”

The stone in the rebuilt central section of the house all came from the property. Hand-blown glass was used in the windows, which were built with copper weights and chains, as they would have been in early America. Strap hinges were hand-forged for the doors. The interior wood is antique chestnut, used in colonial days but now nearly extinct. 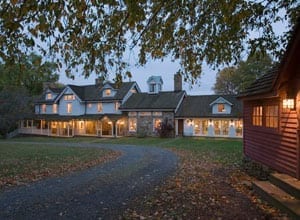 The tiles used throughout the house were fashioned from the original Bucks County Moravian clay used by Henry Chapman Mercer’s famous Moravian Pottery and Tile Works. The clay hadn’t been used for 50 years, Carol says, but “they had 50 bags in their basement they didn’t know what to do with.”

As they rebuilt, the Deutsches decided to expand with two new wings, one a solarium, the other a large kitchen. When it came to the timber frame for their expanded home, the couple turned to Riverbend Timber Framing of Blissfield, Michigan.

Riverbend has more than 2,000 structures under its belt, but for Frank Baker, a company board member and former CEO, the Deutsch home still stands out. Riverbend was asked to replicate the look of 200-year-old timbers that had been hand sawn with a pit saw. “We ultimately ended up building a machine to remill the timber at an angle that would look like a pit saw,” Frank says. “Then you had to blast them with (bits of) corn cob. It’s a much less aggressive form of sand blasting. After that, we had to hand sand it with fine grain paper.”

Frank also remembers that the home had more pieces of timber per square foot than any building the company had ever worked on. A natural, fruit-based stain was used to provide the final touches of authenticity.

Obsessive? No doubt. But the results couldn’t have looked more authentic. “I’ve had people visit who do nothing but restore antiques,” says Carol.“and they swore these beams were hundreds of years old.”