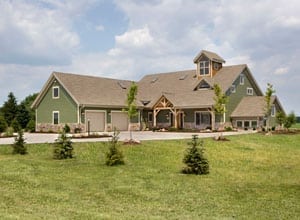 Paul and Suzanne ZumFelde’s new timber home is truly a family place. It sits on 67 acres of Ohio farmland that have been in the family since 1905. It was designed in part by Paul and his brother, California architect Dale ZumFelde, then modified by Fred Friar, a designer with Riverbend Timber Framing, the company for which Paul works as a sales representative.

Paul’s parents live in a private wing of the home, and the couple’s daughter and two young grandchildren live in a separate house on the family compound. “There are four generations in this house every day,” Paul happily reports.

The 5,500-square-foot home, constructed in 2006, is the second that Paul has built on his family’s former dairy farm. He built the first in 1978, using reclaimed timbers from three old dairy barns he’d milked cows in as a boy. He sold that old homestead to build a larger home, which has handicapped access for his parents, who are both in their 80’s.

Paul and Dale started with plans from Riverbend’s Melody Lane model and redesigned them to include a bump-out for Paul’s parents’ master bathroom and a third-floor tower room. Fred then tweaked the plans for timber framing. 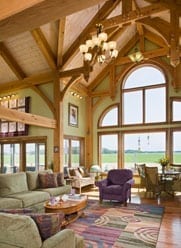 The couple had the choice of building the Riverbend model as a full timber frame or as a hybrid combining timber framing with Insulspan’s structural insulated panels (SIPs). Paul, who teaches energy sustainability at a junior college, chose the timber-SIPs combination to create the most energy-efficient home, a choice that Marty Birkenkamp, Design Department Manager with Riverbend, applauds “I’m a true believer in this timber framing and SIP system,” Marty says. “You can use the SIPs for energy efficiency and use timber framing where it makes most sense, has the most impact. It’s a well-integrated system.”

The couple bolstered the home’s energy-efficiency with Riverbend’s Advantage ICF foundation and walls, an insulated concrete forming system that combines expanded polystyrene insulation with webbed connectors. (For “educational purposes” Paul left ICFs exposed in one basement room, since his home also serves as a Riverbend model.) The home is insulated from its footings to the roof. Six skylights allow for passive solar energy and reduce the need for artificial lighting. Paul also chose an energy-efficient geothermal water heating system.

Riverbend supplied the SIPs and timbers, erected the timber core of the home, and provided an adviser for the SIP construction. Paul hired local subcontractors to complete the work. “I knew all the subs; I had coached some in little league or known them from 4-H,” Paul says. “Most of them brought their families by to look at the house as it was being built. It was a family and community affair.” 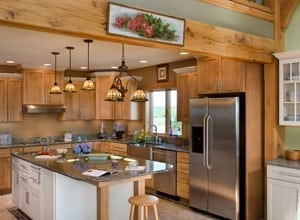 The home’s main floor is open and bright with natural light from the large great room windows and strategically placed skylights. The foyer, which features a cabinet displaying glass collectibles belonging to Paul’s mom, leads directly to the great room and the timber center of the home. The interior timbers are rectangular, red and white oak – Paul wanted oak because its indigenous to northwest Ohio – that peak at 25 feet in a double-hammerbeam truss system. “The hammerbeam truss is a highly requested system primarily because it gives an open space without horizontal beams going across to block the view,” Marty points out.

Paul and Suzanne’s home is a good example of a balanced system, a truly whole-house design, Marty maintains. “What is special about this house is that the timber frame does not dominate the space, but enhances it,” he says. “When you walk in, it’s a very bright, simple and well-lit design enhanced with timber framing.”

Paul appreciates the look and sound of the new timbers. “I love the beauty of them, the way the timbers age and check,” he says. “We hear them pop as they dry out. I didn’t have that experience with my other home because it had reclaimed timbers.” His parents also enjoy the timber framing.“They’d never lived in a timber frame before and they love it,” Paul says. “My dad grew up around dairy barns and the timber framing replicates the feel of a barn.”

The great room gas fireplace is finished with a thin veneer stone; the mantel is a reclaimed timber from the old dairy barns. Above the mantel, 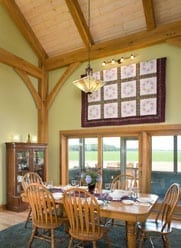 the couple left wall space to display one of Becky’s 39 handmade quilts. They also left quilt display space above the sliding doors that lead from the adjoining dining area to a screened porch. The dining room space was specifically designed to accommodate an Amish trophy case that features varsity awards earned by Paul, his son and his father, Henry, along with trophies awarded to Henry’s Guernsey cows. “This whole house is about heirlooms and family,” Paul says.

The main floor sports a kitchen open to the dining room, a powder room, laundry and mudroom, and the private, sound proofed wing for Paul’s parents. Paul and Suzanne’s master bedroom suite, which features a balcony and a sleeping loft, is on the second floor. The second level also has a loft overlooking the great room and a hall to a 16-by-42 foot room over the two car garage; Paul and Suzanne, a school teacher, have their offices in that room. The home’s finished basement houses Henry’s woodworking shop, two bedrooms, a family room and a children’s play area. With four bedrooms and plenty of open floor space, Paul says, “There’s room for everyone when they come home for the holidays.”

There’s also a very special spot, a 9 by 7 foot roof-top haven where the family can watch a storm roll in, cozy up with a book, or view fireworks from all four directions. Paul calls it the tower room, and its one of his favorite places. The little room is accessible only by climbing a 12 foot ladder from the master bedroom to its sleeping loft, then a four foot ladder from the loft to the tower room itself. “I used to be a mountain climber and now I’m teaching my grandkids that there are good things at the top… but you have to work to get there,” Paul says laughing.