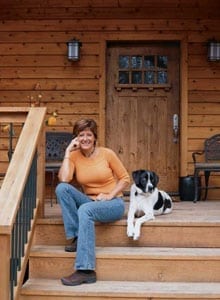 Sometimes you have to listen to your heart. Liana Smith lived in very historic, very traditional Leesburg, Virginia. Even though the Blue Ridge Mountains were in her back yard, her heart heard the Siren’s song of majestic peaks, deep canyons and the wide – open spaces of cowboy country. She dreamed of high – tailing it to the Rockies. The Internet was her fleet-footed horse to pursue that dream, providing the opportunity to live and work wherever she pleased and still maintain her advertising and marketing communications agency. So she trekked all over Colorado, looking for land. A 1.5 acre hillside lot on the edge of a small box canyon near Durango sealed the deal: It was far enough out of town for privacy but close enough to run in for milk.

With her site secured, then carne the tough question: What should she build on it? Should she build an adobe house, which would fit into the Southwestern surroundings, or a timber frame house, which had the look she loved? It didn’t take long for Liana to realize that it had to be timber. “I fell in love with how the huge wood beams look overhead,” she explains. “I realized that with a timber home, I could have the big, open spaces I love without a lot of supporting walls.” This sweeping space between living room, dining room and kitchen turned out to be just right for the contemporary style Liana had in mind.“The house isn’t rustic, even with all the wood,” she says. “You can have contemporary design easily in a timber frame house.”

Riverbend Timber Framing, a Michigan – based company, which had an office in nearby Silverton, provided the timbers – red and white oak with a warm honey finish on the inside and white oak timbers for the front porch to ensure easy maintenance. “White oak has a tight grain that’s impervious to rot,” says Riverbend representative Bob Schmidt.“It will last for centuries.”

For the floor plan, Bob helped Liana modify the “Blue River” model, based on a design by architect Judd Dickey. To customize it to her lifestyle – which includes working from home – they added a walkout basement and an office above the garage. “Working with Bob rather than having to hire an architect to draw up plans saved a lot of money,” says Liana.

Decisions are the constant companions of anyone who builds a home. For Liana, the challenge was making all those choices while she still lived in Virginia. During the planning stage, she and Riverbend kept the post office humming with a flurry of floor plans flying back and forth. When construction began, Bob e-mailed a steady stream of digital photos. “I only came out during construction twice,” confesses Liana. “I was lucky; I had a fantastic builder who I trusted, so I was able to relax and enjoy the process. I think when people build their dream house, they often agonize over every little detail.”

Liana feels especially passionate about the joinery, which she likens to well-crafted furniture: “I get a lot of wows from people when they see it,” she reports. She did, of course, arrive for the big event: the raising of the timbers. Traditionally, the homeowner drives in the first peg, and Liana wasn’t about to miss that. “The timbers go up like an erector set. It’s really cool,” she says. “It feels like a church to me because of the high frame.”

Getting the Right Light

Liana Smith wasn’t sure how to achieve warm lighting for her contemporary timber home. “I was worried too many things hanging from the ceiling would take away from the big open space,” she says. So she chose halogen track lighting. “The tracks light the ceiling and space really well without being harsh,” she explains. In the living room, one track close to the fireplace adds a glow to the stone. Another track adds enough general lighting that she only needed one lamp in the room.

She also had track lighting installed in the dining room, to give her some flexibility when positioning the table. “I usually use candles at the table, and maneuver the track lights (on a dimmer) to provide a nice wash of light.” Over the kitchen island, pendant lights with orange glass shades compliment her contemporary interior style, and recessed cans in the ceiling provide more than enough light for cooking. 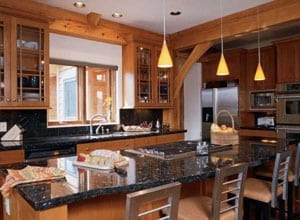 It’s in the Details

Small details throughout the house enhance Lianas contemporary vision. For instance, she opened up the kitchens original design to include a large island complete with seating space. “This house has been wonderful for entertaining,” she says. “People always gather in the kitchen. I had 40 people here for a New Year’s Eve party, and the house didn’t feel full.” Instead of the traditional wooden balusters on the staircase, Liana continued the contemporary theme with black aluminum that matches the black granite countertops found in the kitchen, while a cherry railing matches the wide-plank cherry floors. Contractor Bob James of James & James Construction in Durango created a sleek, untrimmed look for the windows by wrapping the drywall around the edge with a bull-nose corner bead. Soliel Sunscreen blinds roll up nearly out of sight.

Four or five days in Durango was all it took for Liana to choose the finishing touches, such as stone for bathroom showers and tumbled tiles for bathroom countertops. When it came to the fireplace, to stay within budget, she chose a firebox and flue faced with synthetic stone to emulate the reddish, smoky brown colors found in the local mountains. The only heartbreak during construction was the wide-plank cherry floors Liana ordered online. “I wanted to save money,” she confesses. “I paid up front, but the floor never arrived and the company wouldn’t answer my phone calls. I would caution everyone to be careful buying online if you don’t know who the supplier is.” Fortunately, Bob was able to find a local supplier of cherry lumber. “We actually had them make the tongue-and groove onsite as they installed it,” he says. “I lost some sleep over that one.”

But when it came to furnishings, Liana was on solid ground. Her niece, Talia Thompson, an interior designer in Seattle, spent two weeks visiting her aunt. “She picked out everything for the living room and all the bedrooms,” says Liana. “We had such a good time shopping!” Despite the contemporary flavor of her home, Liana did manage to throw a little Southwestern adobe style into the mix. “The walls were finished with a trowel in rough stucco,” she says. “It’s a perfect complement for the timbers.” And Lianas life is perfect in her Colorado home