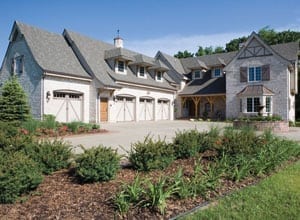 When Bob Burnside moved near Ann Arbor, Michigan, a few years ago, the home-construction veteran wanted to announce his arrival in a big way. So he did what any savvy builder would do – construct a spectacular timber home that would act as his calling-card for potential clients.

“It was built for the local showcase of homes,” says Bob of the place he’s since sold. “It’s held once a year for builders who construct models that are completely furnished and decorated, so it was pretty much done to the nines.”

Working with Riverbend Timber Framing from one of the Blissfield, Michigan-based company’s own designs, Bob enlarged and finessed the floor-plan, built a four bedroom, 4 1/2 –bath house that’s a testament to everything a timber home can be. Rich with native red and white oak timbers, gleaming oak floors and a soaring, elaborately trussed ceiling, the country-French-style home is more than a showstopper – it’s a winner.

“Not only did it receive the national Energy Star five-plus rating, it won a local award for being the first home certified as ‘green built’ in Washtenaw County,” says Bob, who is a preferred builder for Riverbend. “We also won a 2006 Energy Value Housing Award from the National Association of Home Builders. Out of almost 400 entries nationally, we were in the top seven. 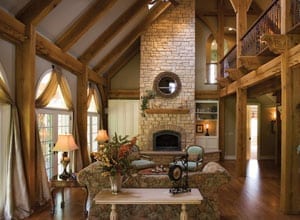 And these were no mere beauty contests (although the timber stunner could’ve easily taken the crown in one of those, too). Instead the awards acknowledged the home’s true value: As large, open and airy as it is, the place is phenomenally energy efficient and gentle on the environment.

“It has a geothermal heating-and-cooling system,” says Bob. “The cost of operation for an entire year of heating, air conditioning and hot water is about $750. It’s a guaranteed winner in terms of saving money.”

That’s $750 for all 7,000 square feet – regardless of how frigid the Midwestern winter or stifling the summer.

Describing it as the world’s biggest hula-hoop, Bob explains the geothermal system relies on a 3,000-foot loop of plastic pipe buried 6 feet beneath the home’s front yard. Fluid circulating through the pipe stays between 57 to 58 degrees, courtesy of Mother Nature. That temperature then becomes a starting point for heating or cooling the home.

“In the winter, we’re supplementing with heat from a compressor,” says Bob. “And in summer, we’re taking the hotter air from the house, circulating it back through the tube and dissipating the heat into the ground. When it comes back, it’s 58 degrees. That goes back in the system and is more than enough to help cool the house when we only need 72 degrees.” 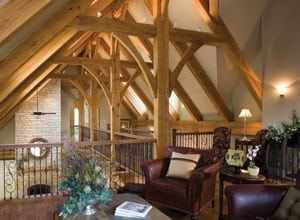 To keep all that cozy or cool air inside the home relies on Insulspan structural insulated panels, which Bob says were an essential part of giving the space the “green” treatment. Key, too was the fact that Riverbend and Insulspan are sister companies. “The timbers and the structural insulated panels come from the same design department, so what you get is a product that’s designed to work well together,” says Bob. “Sometimes when you mix products, you open yourself up to problems.”

But when you do things right – including choosing timber in the first place – you just may end up with an unforgettable, efficient place to live.

“If somebody really wants a unique house with incredible beauty,” says Bob, who’s putting the finishing touches on a new timber house of his own, “they should seriously consider a timber home.”